View source
watch 01:36
We're Getting Mutants in the MCU - The Loop
Do you like this video?
Play Sound

Ayato Sakamaki (逆巻 アヤト Sakamaki Ayato) is the third son (biologically the fifth) of the Sakamaki household. Ayato along with Laito and Kanato, the triplets, are the sons of Cordelia and Karlheinz, the Vampire King.

Ayato is a slender young man with unruly, reddish-colored hair spiked at the ends, narrow green eyes, and a fair complexion. He also wears a black stud on his right ear.

In Haunted Dark Bridal, he usually wears a white shirt that has brown bordering the top and bottom of the shirt with a black jacket and brown scarf. He wears it with blue jeans with a belt attached to both sides of his pants that hang down and go around his pants.

In MORE BLOOD, he wears a black jacket with a red hoodie underneath. Under the hoodie is a white shirt with a black V collar. He wears it with black pants. He also wears a chain necklace.

His school uniform consists of the typical black school blazer with an unbuttoned white dress shirt and an undone red tie around his neck and the right collar of the shirt. He dons black pants, the right leg rolled up to his knees, and a pair of red and black sneakers.

Ayato is a narcissistic prankster who has an obsession of being the best due to his upbringing by his mother. Known as the troublemaker of the household, Ayato is an attention seeker and loves mischief. He looks down on others and loves to bully and tease people, bragging about himself and sometimes commanding everyone to call him "Ayato-sama". He refers to himself most of the time as “Ore-sama” (Yours Truly in the English Dub) and refers to Yui as "Chichinashi" 「チチナシ」 (Breastless or Pancake in the English Dub).

Ayato is very energetic and loves sports; basketball being his favorite. Ayato has stated that anything is fine as long as there’s a goal to reach for and that sports is his strong point. He also has a passion for torture devices; such as the Iron Maiden that can be found in his room, which he uses as a bed (the spikes are removed). It is also noted that he eats a lot (only if it is his favorite food takoyaki and gets very angry if someone eats his food), although Ayato stated that vampires need to drink blood to savor the taste.

However, he can be quite the rebel, using vulgar language and tends to be arrogant as he always calls himself the strongest and the best. Ayato would insult his mother (even after her death), his father, and his brothers by telling them off and calling them names such as calling Kanato a "hysteric" and Reiji, "shichisan megane" ("Tableware Otaku" in English). He hates being told what to do and is easily impatient. When he wants something, he will spare no time to get it. Whenever things go his way, he acts unsurprised.

Ayato has a hard time expressing his feelings and tends to hide them with insulting words. He also quickly gets jealous of anything, such as Yui being around the other vampires. He is sadistic and possessive towards Yui, and in some cases, can be perverted. However, he claims that he doesn’t care for someone like her and that he enjoys torturing her just for fun of it. Despite Ayato's villainous traits throughout the series, he eventually redeems himself, showing real affection and love for Yui in the end.

Ayato is the oldest triplet, with Laito being the youngest and Kanato being the middle. Even though the first to be born is Laito, the order of the triplets is determined by an old Japanese tradition where the last one to be born is considered the oldest. The Diabolik Lovers’ universe seems to follow that and it is considered that Ayato is the third son in the Sakamaki family and the eldest triplet.

Ayato was the one who got the most attention from his mother especially as a child, and arguably endured the most of his mother's abuse towards him, at first not even trying to bother with the things Cordelia was doing to him. Cordelia strictly raised Ayato to the point of punishment so he could become the best in order for her to regain her role as the most important woman in Karlheinz’s life. The most notable was in the first game, where Ayato had a flashback of his own mother drowning him in the lake as a punishment and that he won't get up until she told him to. In the other games, Ayato was slapped by her for destroying a flower given to her by Karlheinz. Then in another, he built a sandcastle to show off to Cordelia, but she only destroys it and tells him that it was not worth showing it if it wasn't real. Even if Ayato got the most attention, he was strictly being hurt by her as per her selfish wishes of making him the heir of the Sakamaki. Those things that she did to him led to him thinking of trying to kill her, thus fueling that hatred.

Ayato seemed to be close to Kanato and Laito when they were younger. The three were shown to get along together, as shown in a flashback in which a bat that Kanato just caught escaped. All three attempted to catch the bat together. Ayato's relationship with his brothers changes slowly due to their endless competition over the attention of their mother, which she was mostly refusing them equally. Still, Ayato sees himself as an older brother to Kanato and Laito and feels them far closer than his half brothers. Even though he would insult his triplet brothers easily, he can also show care for them sometimes. He is not too close with the rest of his siblings.

In the DIABOLIK LOVERS Do-S Kyuuketsu VERSUS Ⅱ Vol.1 Ayato VS Laito cd It is revealed that Ayato had an idea about what was happening to Laito (The triples would often sleep together in the same bed and Ayato would notice Laito disappear), and feels guilty for not helping him. He also admired Laito for being so strong, but always felt angry when Laito wasn't honest with him especially about what was his mother doing to him. 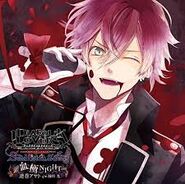 Ayato has a very complicated relationship with his mother. As a child, he hoped to get her affection and acknowledgement and endured her mistreatment to a growing resent. As an adult, he usually speaks ill of her and played an important role in her murder.

Ayato has always despised Karlheinz and usually calls him “rotten old fool” even in his presence. All that Ayato knows from his father is his neglect and cruelty towards Cordelia that reflected towards him and his brothers. He does fear him as a superior, but knowing that he is the cause of all their misery leads to Ayato disliking Karlheinz. This is especially in the end of both in More,Blood and Dark Fate, Ayato realizes that Cordelia is not to blame but Karlheinz is and cannot forgive him. Ayato usually kills Karlheinz in most of the AU versions of the story (Game and Fandisc) .

Karlheinz's younger brother, Richter, is Ayato's, along with all the other Sakamaki brother's uncle. Ayato doesn't seem to have any positive feelings toward Richter. Richter is called an "old man" by Ayato. Ayato never really viewed Richter as a threat until the truth about his mother was revealed. It is revealed that Richter is the main reason why the Sakamaki triplets' attempted murder of Cordelia failed, causing him to be a hindrance to Ayato. In the first game and anime adaptation, they both fight over the awakened Cordelia in Yui's body, and Ayato later stabs him.

At first Ayato's treatment towards Yui was more of "food and prey" and he's fond of teasing her, frequently calling her nicknames. He grew fond of her as time passed (this is shown throughout his route in the first game) and vows to protect her when Karlheinz attempts to take her. Yui always looks out for Ayato's wellbeing even though he has repeatedly harmed and threatened her claiming that she is not afraid of him. As a result, Ayato grew to have feelings for Yui, growing attached to her and even stating that he loves her. He has married her in almost all of the Diabolik Lovers games.

He plays the antagonistic role in Ruki's MORE BLOOD route. Ayato was furious when Yui "left" him for the Mukami's. He tried to take her back when she was finally allowed to attend school, but Ruki intervened and told him to not lay a hand on Yui. In the Ecstasy story, Ayato manages to find the Mukami's whereabouts. He flies in one night and punches Ruki after he took Yui out of the dungeon for a brief moment. When Ayato was about to fly off with Yui, Ruki stopped him and told Ayato that he will let him take Yui back, but he wants to know if he's reclaiming her because he loves her. Hearing this, Ayato scoffs and responds saying that Yui's blood is the best prompting Ruki to order him to leave without her. He knocks Ruki out again and sets his mansion on fire before escaping with Yui. However, in the Brute and Manservant Endings, Ruki kills Ayato due to his jealousy towards the Sakamaki's (Brute) or in order to reclaim Yui for himself (Manservant). In the second season of the anime, Ruki allowed Ayato to reclaim Yui when he realized that he and his brothers were incapable of becoming "Adam". Though in the final episode of the anime's second season, they discuss an unlikely alliance to protect Yui from the Tsukinami's.

In Ayato's MORE BLOOD route, Ayato considered Ruki a threat and got irritated every time he saw him with Yui. He also got annoyed when Ruki kept trying to persuade Yui to come to him instead. Ayato was also aware that Ruki had sucked Yui's blood behind his back which was used to taunt and provoke him. In his Ecstacy chapter, Ruki provoked him which caused Ayato to stab him in a fit of rage. In his Brute Ending, Ayato kills Ruki after catching him biting Yui to satisfy her masochistic desires (having had been told by Laito).

By drinking Yui's blood, Ayato's abilities grow stronger. In general, as a vampire he has an inhuman strength as well as increased speed, increased vision and hearing, and smell. Being a vampire, he also has fast healing and healing saliva.

He appears to be capable of teleporting from nowhere in an instant.

During a full moon, he can fly.

He has swordsmanship talent, as seen when he fights with Richter in the anime.

He can control and summon familiars.

Since he is a pure born vampire, he can only die if his head is cut off, however if his body is too damaged to heal fast enough it might also be life-threatening even if not directly.

Community content is available under CC-BY-SA unless otherwise noted.
Advertisement